View basket “Sieze the Day – Making Waves” has been added to your basket.
Sale!

The Lakeland Fiddlers – One Big Fiddle 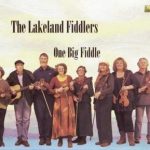 The Lakeland Fiddlers – ONE BIG FIDDLE

The Lakeland Fiddlers is a community band with a fluid membership; it was formed just over ten years ago out of an Adult Education class at Kendal’s Brewery Arts Centre, since which time it has performed regularly at all manner of local festivals, fairs and galas. Its repertoire, naturally enough, focuses on (although without consisting quite exclusively of) fiddle tunes from the local region (the Lake District), and for that reason alone a recording such as this is to be heartily welcomed by any devotee of good tunes. Although it’s fair to admit that a healthy degree of Lakeland provenance (or at any rate authentic local “adoption”!) is also persuasively ventured for tunes such as My Love Is But A Lassie Yet! But who could argue (on any grounds) with the Fiddlers’ neatly idiomatic rendition of the Norwegian tune Springar Fra Gossen?… The band consists of 15 fiddle players (inclusive of its leader Carolyn Francis, who has also composed some of the tunes herself), with a “big fiddle” and an acoustic guitar for basic underpinning accompaniment and other duties. One Big Fiddle turns out to be the band’s third record; I’ve not heard its predecessors, but this one, recorded live at Slough Farm in Docker during 2009, is a fine demonstration of just how much can be achieved by an ensemble of enthusiastic and committed non-professional players (no disparagement intended). As well as the wonderfully lusty full-on massed-fiddle treatments, a more restrained approach to ensemble dynamics is also successfully displayed on several of the selections, while the disc also contains examples of characterful solo fiddling by Carolyn herself (e.g. the horse-themed jigs set, the self-penned border pipe reels and the haunting Nancy’s To The Greenwood Gone), and there’s a nicely judged guitar solo (Richard Selvidge) on the lovely, mellow Trip To Galloway (learnt by Carolyn from the Boat Band’s redoubtable Greg Stephens). The sense of genuine relish with which the players dispatch these tunes is well communicated on this recording, and whatever the slight (inevitable) rough edges and occasional lapses in intonation this is a disc to be treasured, not least for the exposure it gives to some quite rarely-heard but delicious tunes of course, but overall definitely for the wonderfully spirited togetherness of the playing. Favourite tracks of mine, which have already been put on replay mode, include the Needles And Twine and Kendal Lilt jig-sets (tracks 20 and 11), Henry Stables’ Grand Hornpipe and the final medley (The Common Ground/Catalan). And by the way, this well-filled disc also treats us to a pair of dialect recitations by Steve Grundy, to give a flavour of his earthy regular contributions to the Fiddlers’ monthly sessions at the Hawkshead Brewery Beer Hall in Staveley (now that would be worth a visit methinks!).