Heavy Duty: Ballads of the Unfree 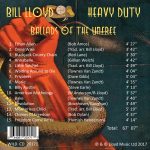 These are dark songs about the land of the free. They are mostly politcal, but not party political – they just point out a few truths which used to be ‘self-evident’ but are now dismessed as ‘fake news.’

These are heavy duty ballads, often in minor keys, telling of war, grief, slavery, piracy, rape, murder, addiction, poverty, prison, execution, regret, resistance and revolution. Some are bright, some dark. Some are hopeful, some offer little hope, and some offer no hope at all.

In difficult times, most people want entertainment – up-tempo, optimistic, good time music, – and there are few opportunities to sing the tough, dark songs, so I have put them all on one album, as a reminder of the liberal ideals which made America great, but which now seemed threatened.

By highlighting injustice, the songs of pity become songs of anger and of hope. Every season has an ending. Hope dies last.