I wrote Johnny Eagle’s obituary for the Belfast Telegraph in July 2001, and memories of Whitworth Fair reminded me to dig it out and publish it again. (Photos copyright unknown) 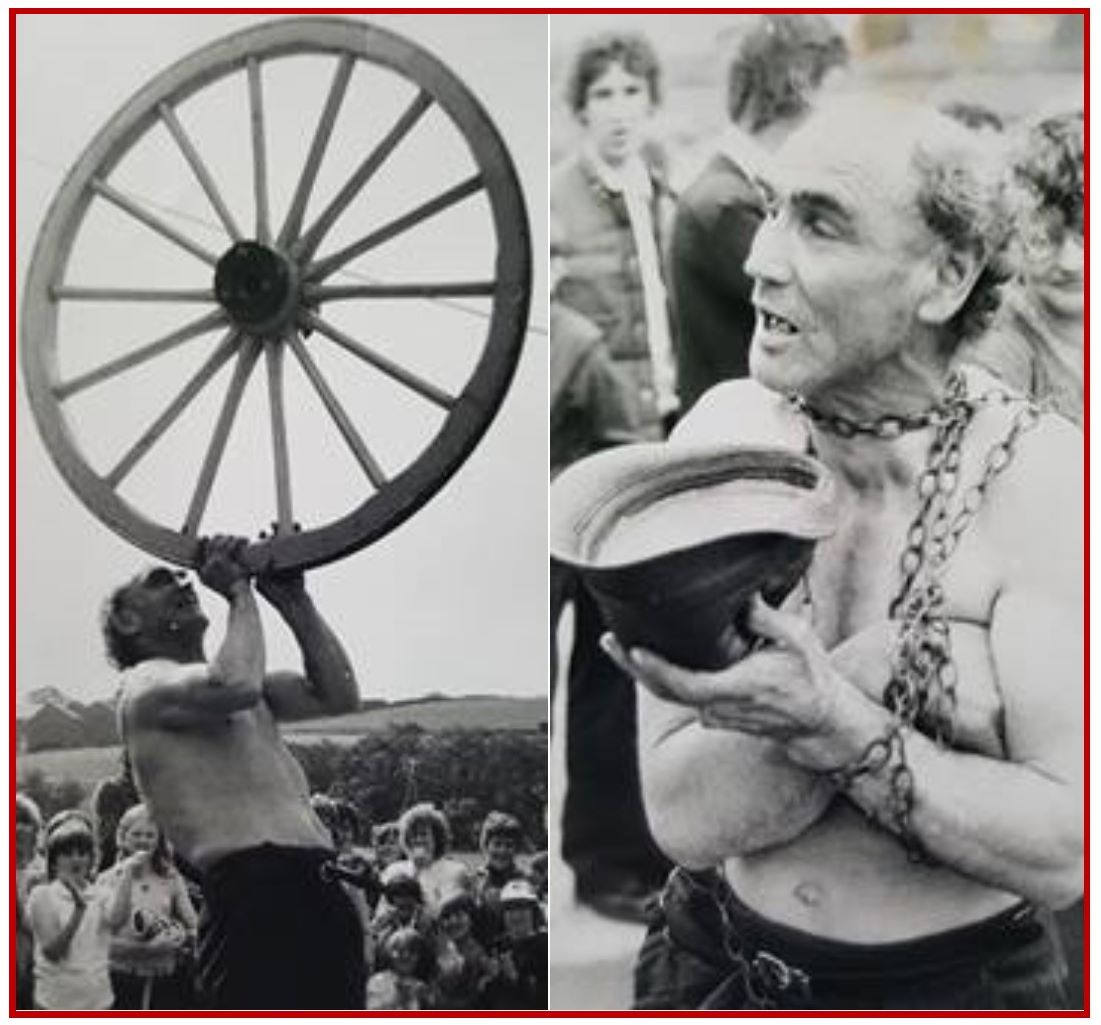 July 2001. Johnny Eagle, the gypsy strongman, was buried today at Witton Cemetery near Birmingham.  Born in Belfast about 84 years ago, the Eagle spent most of his life at the top of his various trades. As a street entertainer on Tower Hill in London, performing extraordinary feats with a minimum of trickery, he was unsurpassed in his time.  He drew the crowd by swinging a 20 foot chain like a whip, making it crack like a rifle shot, then wrapping it round his neck to have 6 strong men pull at each end so that his feet were lifted off the ground.  He could bend an iron bar by beating it over his forearm, swallow a watch and chain before your very eyes, or correctly guess the amount of money in your pocket.  He claimed to have pulled a bow-top wagon from Scotland to Appleby Fair by hand, and he once pulled a wagon onto Appleby drawn by a donkey and a goat.  I personally saw him pass an eight inch hatpin through both cheeks, with no blood and no apparent pain, and then laugh as people fainted.  In his later years he revealed that his parents had pierced both his cheeks as a child to allow him to earn a living with this trick.

He spoke two languages as well as English:  Romani, and Gammon, (also known as Shelta, The Irish travellers’ form of Gaelic, or North Country Tinkers’ Cant.)  His street performances were delivered with a distinctive, penetrating, rhythmic, falsetto voice, calculated to be heard above the street noise, and to entice curious passers-by into the circle of astonished punters.

He had an extraordinary memory and was a shrewd dealer, for whom buying and selling in order to turn enough profit for the day’s food and drink was as natural as sleeping.

He was an acknowledged master in training birds to speak, and in his latter years he settled into a tiny ground-floor flat in Shawforth, near Rochdale, and people came from all over Britain to see him, to trade gold rings or buy talking birds, horses and harness, or just for the craic.  Hardly any of them came to ask him to teach them his trade, and so it mostly died with him.  There were few like him, and they have all gone now.

He seldom missed one of the Northern Horse Fairs – Appleby, Lee Gap, Yarm, and the rest – not only to pitch his gypsy strongman act, but to meet up with friends, to buy and sell, and to let everyone know that the Eagle was still alive.

He admitted to six children, (three sons, three daughters,) and there was a host of grandchildren and great-grandchildren at the funeral. The cortege left St. Peters Church in Bloxwich and travelled for almost an hour to a piece of waste ground near Witton, where the coffin was transferred out of  the sleek stretch-limousine hearse and into a magnificent horse drawn carriage, drawn by as fine a pair of black Friesian stallions as you could wish to see.

The procession from there to the graveside took another half an hour: the immaculate liveries of the horsemen set off by the tall black plumes on the heads of the snorting stallions, and a long train of mourners.   Black leather jackets and blue cashmere suits walked beside divine looking women and girls, dressed in everything from Spice Girls club-wear to ancient widow’s weeds.  Heavy gold chains hung from male and female necks and wrists, hardly an ear or finger but was weighted with gold rings. Real tears rolled down the cheeks of serious fighting men.

At the cemetery gates there was a delay. They were not expecting him, which might have been a problem but a JCB had come along to do the digging while we waited – everything taken care of.

At the graveside, after the priest had performed his final acts of devotion and then sensibly retired, a portable music centre was produced and wedged into the mound of earth.   There was hardly a word or a movement among the crowd for ten minutes as it played Eagle’s favourites.   No one was in any hurry.  Roses were dropped into the grave. Another five minutes passed. A truckload of flowers was carried from the road, carefully unwrapped from their plastic covers, admired, and laid onto the coffin.  More time passed.

Then a shout from behind the crowd: Hey boys!  Six spades were handed through the crowd to the waiting brothers, sons and grandsons.  Cashmere jackets were removed, shiny shoes trod the cemetery clay, and the spades set to work, strong and steady.

In a few minutes there was nothing to see but a grave mound, and another truckload of blooms was laid out – hearts and flowers, horses and songbirds. There was a clear but unspoken sense of  pride in the job done right, of having cut through the ritualised funeral gestures and conventions into something real  – something so definite and so final as burying the man with their own hands.  The idea of having anyone else bury Johnny Eagle was just not acceptable – Romani and Irish dignity and pride did the job – and they did it in style, and they did it in person.

The Eagle is dead.  Rest in peace, Johnny. 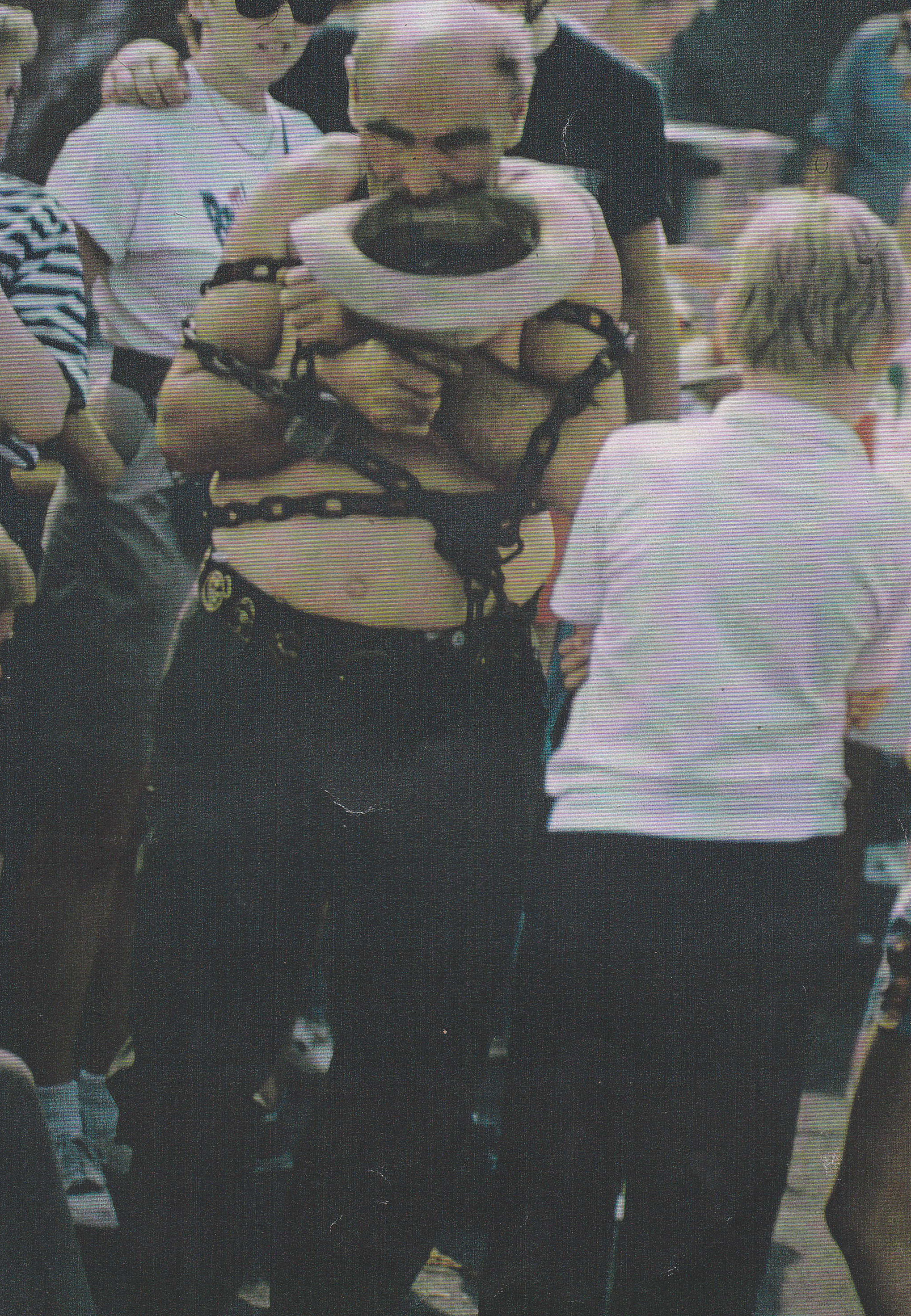 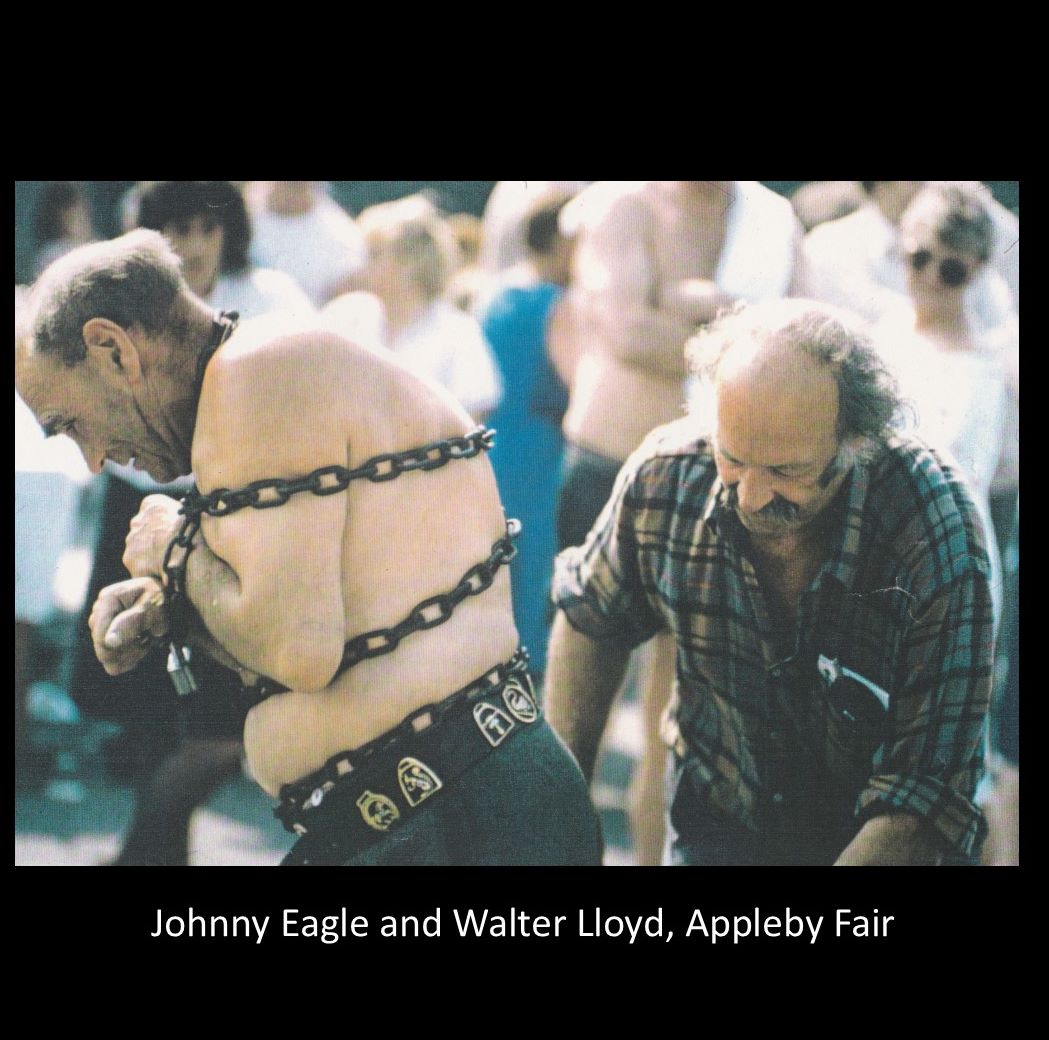 One Horsepower eBook now available for download from the shop, price £5.00 Dismiss